Firstly, I must admit that I am new to golf. Last Sunday (20th of June 2010), my batch mates from STAR organised a golfing session at Sime Darby’s Carey Islands Golf Course. Credit should be given to Sdr Opec for hosting the event. Initially, 8 people confirmed to join but towards the 20th of June, we had two casualties. The first was acceptable as our friend was invited to attend his cousin’s wedding (family comes first right?). But, in the early hours of 20th June – 4.30 am to be exact, we had one ‘hamba Allah’ messaging the whole group saying that he just came back from site visit and he might not make it as we intend to tee-off at 8.30am sharp. We were still wondering – which ‘site’ did he visited….

Anyway, after Subuh prayers, I drove to Telok Panglima Garang via Jenjarom to have breakfast with Sdr Tonggek. Then, about 8.20am, Opec, Efi and Bodent arrived at the meeting point. Opec leads the way to the club and to my surprise, it was quite a loooooong journey through the plantation estates. Shortly, after arrival, we saw Balau arriving in his black Vios.

All set, flights were divided, Yellow House and the Rest of The World. Opec (White), Tonggek (Blue) and myself (Green) in the first flight and the Yellow Dragons – Efi, Bodent and Balau in the 2nd flight. We were too ambitious to complete 18 holes on that day as the weather turned out to be TOO SUNNY! Most of us (I think it is safe to say all of us) were dehydrated as early as the 3rd hole! After completing the 5th hole, there was a hut for the golfers to freshen up. We took the opportunity to rest under the hut – away from the burning sun whilst waiting the flight from Yellow House to complete the 5th hole. Balau and Efi – both are seasoned golfers, showed a nice example to us how a shot is taken. It was indeed beautiful! 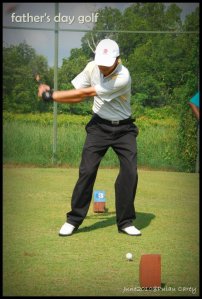 Another 4 holes to go, we decided to combine flights (although it’s against the golfing etiquette). It was at the 7th hole that we were entertained by Balau’s splendid chip-in. At this stage, most of us are hoping to end the session as soon as possible. It’ a no-no to play 18 holes for the day. At the last hole, all of us performed well – especially Bodent. As for me, I too had my personal best score at the last hole. I managed to get a bogey. For Bodent – who is a beginner (a real beginner with no driving range experience), for a Par 4, he was already on the green after the 2nd shot. Unfortunately, he missed the birdie putt but managed end the game with a par! Congrats to Bodent….

Although we played only 9 holes, with burning sun, it is still worth it. There’s always a first time for everyone. One would not learn without doing mistakes. It’s what one learns from one’s mistakes that determines the improvement of one’s game in the future. After the game, we had lunch at Nasi Padang Restaurant at Teluk Panglima Garang.

We adjourned at about 3pm. We are looking forward to our next golfing session – don’t know where, and when. Our dear friend who’s working in Kerteh, Terengganu is willing to be the host (I was told). We’ll see how it goes. All in all, it was a good father’s day outing.

Born 18 February 1979. Received primary education at King Edward VII School, Taiping, Perak and continued his secondary education at Sekolah Tuanku Abdul Rahman (STAR), Ipoh, Perak (1992-1996). He was awarded a scholarship by the Public Service Department to further his studies in the United Kingdom. Completed his A-Levels at Brooke House College, Market Harborough, Leicestershire, United Kindom in 1999 and gained entry to the University of Kent at Canterbury, United Kingdom. Graduated with a Joint Honours Degree in Computing and Accounting & Finance in 2002. He later pursued his post-graduate studies at the School of Oriental and African Studies (SOAS), University of London in 2003 specialising in Malay Aristocratic Genealogy. Former Chairman of the United Kingdom Executive Council for Malaysian Students (UKEC) from 2001-2003. He was a banker by profession – specialising in Cash Management & Islamic Finance. He is now heading the corporate affairs of a technology company based in Putrajaya. An appointed member of the Community Representative Council for Putrajaya (MPPWP Sub-Zone H) by the Minister of Federal Territories. He is also an elected member of the Executive Committee for Persatuan Darul Ridzuan, heading its Heritage Bureau. He is also the founder and currently serving as Secretary of the Persatuan Keturunan Megat Terawis Malaysia (The Megat Terawis Clan Association of Malaysia). A Grade 8 holder in Pianoforte, he is an active musician, composer and arranger. He married his 3rd cousin – Puteri Nuur Khadijah Binti Megat Ramli in 2004 and was blessed with two children – Megat Idris Naquiyuddin and Puteri Mariam Sophia.
View all posts by Megat Iskandar At-Terawis →
This entry was posted in [4] STAR Old Boys. Bookmark the permalink.