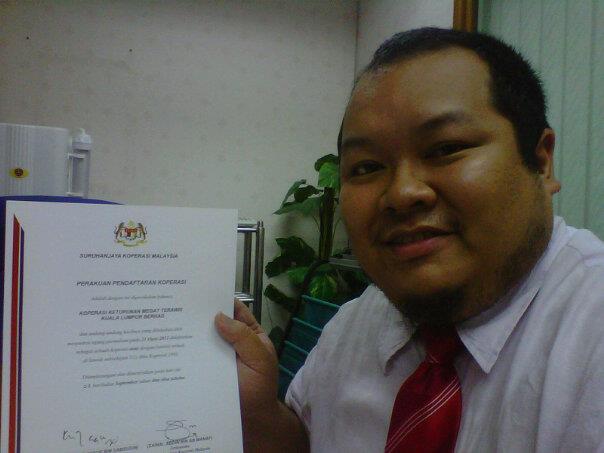 The Megat Terawis Clan Association in their last Annual General Meeting has decided to form a co-operative to act as the clan’s business arm. After months of discussions, meetings between protem committee members and the Malaysian Co-operative Commission, we managed to hold our Inaugural General Meeting on the 21st August 2011 at USJ, Selangor. After the successful meeting, all documentations were finalised and submitted to the Commission for approval. Finally, today – 5th October 2011, I represented the Board of Directors to meet the Commission to receive the Registration Certificate of the Co-operative. The official birth date of the Co-operative is 23rd September 2011.

As Acting Secretary to the Board, I will call for the first Board Meeting of the Co-operative in the near future. Just to share with you readers out there, these are the elected Board Members of the Koperasi Keturunan Megat Terawis Berhad (KOME….sounds very Perak-ish):

So stay tuned…we’ll be knocking on your doors for subscription!

Born 18 February 1979. Received primary education at King Edward VII School, Taiping, Perak and continued his secondary education at Sekolah Tuanku Abdul Rahman (STAR), Ipoh, Perak (1992-1996). He was awarded a scholarship by the Public Service Department to further his studies in the United Kingdom. Completed his A-Levels at Brooke House College, Market Harborough, Leicestershire, United Kindom in 1999 and gained entry to the University of Kent at Canterbury, United Kingdom. Graduated with a Joint Honours Degree in Computing and Accounting & Finance in 2002. He later pursued his post-graduate studies at the School of Oriental and African Studies (SOAS), University of London in 2003 specialising in Malay Aristocratic Genealogy. Former Chairman of the United Kingdom Executive Council for Malaysian Students (UKEC) from 2001-2003. He was a banker by profession – specialising in Cash Management & Islamic Finance. He is now heading the corporate affairs of a technology company based in Putrajaya. An appointed member of the Community Representative Council for Putrajaya (MPPWP Sub-Zone H) by the Minister of Federal Territories. He is also an elected member of the Executive Committee for Persatuan Darul Ridzuan, heading its Heritage Bureau. He is also the founder and currently serving as Secretary of the Persatuan Keturunan Megat Terawis Malaysia (The Megat Terawis Clan Association of Malaysia). A Grade 8 holder in Pianoforte, he is an active musician, composer and arranger. He married his 3rd cousin – Puteri Nuur Khadijah Binti Megat Ramli in 2004 and was blessed with two children – Megat Idris Naquiyuddin and Puteri Mariam Sophia.
View all posts by Megat Iskandar At-Terawis →
This entry was posted in Uncategorized. Bookmark the permalink.